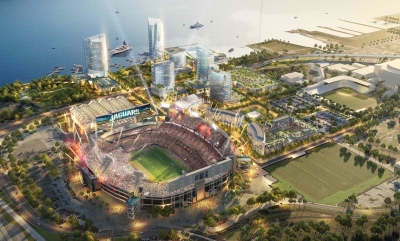 NFL’s Jacksonville Jaguars has joined hands with the Cordish Cos. to co-develop a $2.5 billion mixed-use district along with Iguana Investments at a site near Jacksonville NFL stadium. This development, along with the Oakland Raiders $1.8 billion stadium coming up in Las Vegas, underlines the scale of investments in sports venues across the United States.

No timeline has been announced for the project, but the full buildout may take decades. The site, previously used by shipyards and oil tank farms, will require cleanup of petroleum-contaminated soil along with approval from environmental regulators.