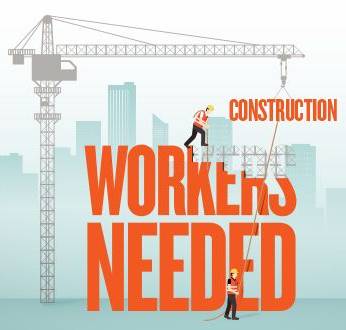 The employees that are on site are overworked and projects are not being completed on time. Some projects have taken twice as much time as estimated.

This shortage has resulted in the inflation of costs for construction companies. Since the beginning of 2018, subcontractors have raised their prices by approximate 10%. An average contractor is now paying double of what they were paying 10 years ago to the subcontractor.

Demand for housing as well as commercial installations has recently seen a surge. Experts predict that 1.2 million homes will need to be built in order to meet the demand of potential homeowners. At the beginning of the year, there were 250,000 unfilled construction jobs. According to the Associated General Contractors of America, a trade group for commercial builders, the unemployment rate in the construction industry was 7.4% in March.

According to the National Association of Home Builders, 82 percent of home builders regard the cost and availability of human resources the biggest challenge that they are facing

What is causing the people shortage? The financial crisis of the past few years could take some of the blame. Laid off employees just never returned to work.  What about environmental factors? Blazing hot days and chilly winters compared to temperature-controlled offices.  Then salaries and hours worked have to be considered. The days are long in the construction industry. Do the hours equal the pay?

What is being done to solve the employee shortage?

Construction vocational training has been introduced at several places and some companies are attempting to recruit former military personnel and individuals from other industries into construction, but changing trends takes time, a lot of it.

Several vocational schools have wood and metal training equipment, but it is lying around useless. Despite the potential for high wages, high demand, and self-employment, people are hesitant to join the industry. Companies are doing what they can to convince folks that construction is an industry where they can start a business with a comparatively negligible investment. They are trying to convince the young job seekers that joining the industry will provide them with an impressive paycheck along with upward mobility.

At a time when vocational training is gradually vanishing from high schools and when students are regarding college to be a necessary factor for a successful future, companies need to find what measures they can take to bring in the workforce. Shortfall will continue until the industry begins attracting the graduates.

Construction companies need to take some drastic actions to convince potential workers about joining the industry. Introducing a flurry of financial, career, and cultural changes has become mandatory in today’s scenario to get them on the bandwagon.